When Tibetans refer to ‘Tibet’ they are talking about the entity comprising the three provinces of U-Tsang, Kham and Amdo. The two Tibetan provinces of Kham and Amdo are now largely incorporated into the Chinese provinces of Qinghai and Sichuan (upper/right regions in brown on the map). Tibet’s traditional territory now accounts for one quarter of the landmass of the People’s Republic of China.

Below shows recent uprising that spread all over Tibet. Chinese efforts to divide Tibet has failed! 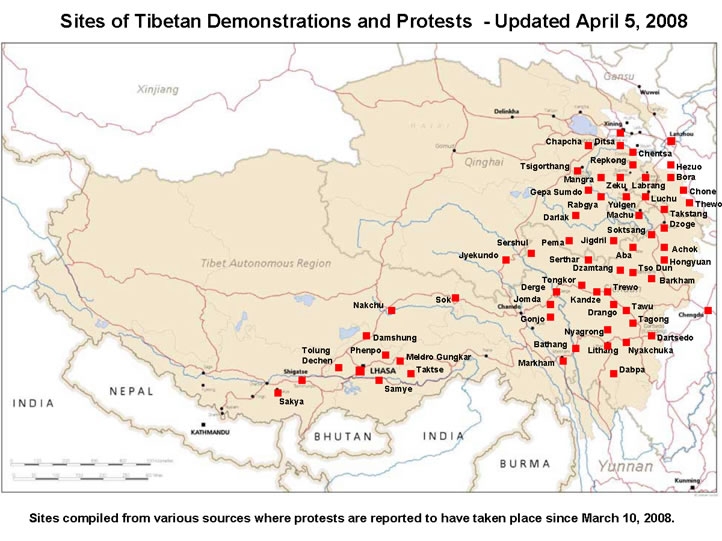 Population: There are around 6 million Tibetans; 2.7 million live in the TAR and the remainder in the Tibetan areas outside the TAR. There is also an undetermined number of Chinese in the Tibetan areas with the Tibetan Government-in-Exile estimating that the Chinese now outnumber Tibetans in Tibet. Additionally, approximately 120,000 Tibetans live in exile.

Government: The Communist Party of China rules occupied Tibet. However Tibetans, both inside Tibet and in exile, recognise the Tibetan Government in Exile based in Dharamsala, India as their legitimate government.

Head of State: His Holiness the 14th Dalai Lama. Now living in exile in Dharamsala, India. The Head of State under Chinese occupation is the Chinese President Hu Jintao.

Language: Tibetan. The official language in Tibet following the occupation is Chinese.